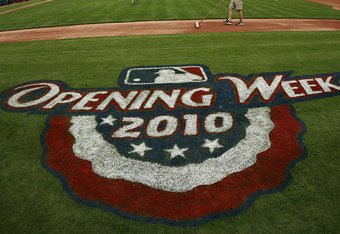 Opening day for Major League Baseball was held Sunday, April 4th at 8:00 pm in Boston's Fenway Park. This made for a very exciting Opening day because the Boston Red Sox were taking on the 2009 World Series Champion New York Yankees. The game started off with a surprise even before the game officially started. It all started when Pedro Martinez came out of the Green Monster wearing a Red Sox jersey and threw out the first pitch of the 2010 season. There was a surprisingly warm welcome for Pedro even though Pedro left that team not on the best of terms. This game was extremely exciting and went back and forth and just like a true Sox vs. Yanks match-up, exciting till the end. The Red Sox prevailed coming away with the 9 to 7 win.

Opening Day for the rest of Major League Baseball came on Monday, April 5th (except for the Tampa Bay Rays vs. Baltimore Orioles which came on Tuesday, April 6th). It was an exciting opening day as well. President Barack Obama threw out the first pitch in the Washington Nationals home opener vs. the Philadelphia Phillies. President Obama came out in his Nationals jacket and pulled out a Chicago White Sox hat before he threw the first pitch (die hard White Sox fan, and from Chicago). In this game, Roy Halladay after making the switch from the American league to the National League, won his first game, allowing 1 run over 7 innings in a 11 to 1 win. The other exciting game was the Atlanta Braves vs. Chicago Cubs. This was the heavily anticipated first at bat for 20 year old Jason Heyward of the Atlanta Braves and he did not disappoint. In His first at bat, Heyward took the pitch from Carlos Zambrano 476 feet to right field for hist first Major League hit in his first Major League at bat, a 3 run Home Run (becoming only the 105th player in MLB history to do so).

He also recorded the fastest swing of the day according to ESPN at 114.5 mph. Heyward finished the game going 2 for 5 with 4 RBI's and 2 runs scored. Heyward said the highlight of the day fro him was being able to catch the first pitch from baseball legend Hank Aaron.

There was even a play that happened on Opening Day that many are calling the play of the year and there has only been one game played! This play took place in the Chicago White Sox vs. Cleveland Indians game. Chicago pitcher Mark Buehrle took a line drive off the foot which deflected towards the first base line, Buehrle pursued the ball and caught up with it, then flipped ball backwards between his legs to first baseman Paul Konerko who caught it bare-handed for the out.

Mark Buehrle Play Of The Year

Needless to say this year will be an exciting one for MLB and there should be plenty more spectacular plays and stories to come!